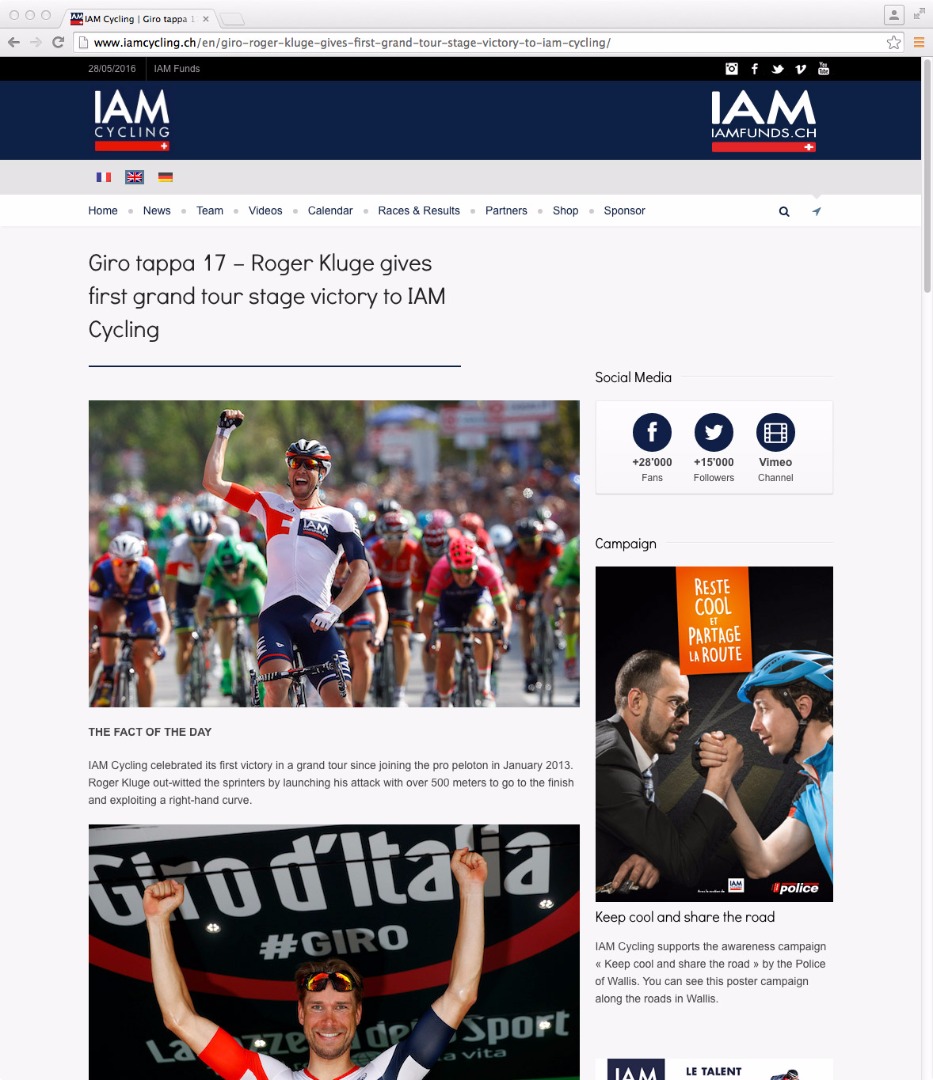 Roger Kluge (IAM Cycling) has claimed victory in stage 17 of the 2016 Giro d'Italia. The German rider escaped from the group in the final kilometre to secure a dramatic solo victory. The win marks the first Grand Tour stage win for Kluge and for the IAM Cycling Team.

Full stage coverage and video of finale at cyclingnews.com

THE FACT OF THE DAY: IAM Cycling celebrated its first victory in a grand tour since joining the pro peloton in January 2013.  Roger Kluge out-witted the sprinters by launching his attack with over 500 meters to go to the finish and exploiting a right-hand curve.

THE QUOTE: “It’s a dream,” the 30 year old Kluge commented just before mounting the podium.  “I am filled with so many emotions.  To have won just a few days after barely avoiding a time elimination, and then just two days after hearing the team announcement that our adventure together will end at the end of the season is just amazing.”

THE EXPLANATION: Roger Kluge collapsed into the arms of his teammates in celebration after this stage which ended with a speed of 43.417 km / h. Kluge was emphatic when thanking his teammates for their work that reeled in the breakaway. "Vegard Stake Laengen did a huge job because without his work, those six would have made it to the finish for the victory.  Then we were really trying to place Heinrich Haussler well.  But he and I just were not able to stay together.  After we passed under the flamme rouge, I managed take the final bend in second position just behind Pozzato.  I did not hesitate when following him even if we were still 500 meters away from the finish.  I just gave everything and I have no regrets.   I had a strange feeling when I passed Pozzato, as if the field was riding in slow motion.  I even had the chance to turn around with 50 meters to go, and then savor my victory.”

THE ENTHUSIASM: Heinrich Haussler was ecstatic when talking about the victory of his friend and roommate: “It really is pure happiness to win this after all the worries we have had since the beginning of the Giro on top of the announcement that the team will end.  Roger has earned this because he is a model teammate, and has always been ready to commit himself to the team.”

THE NUMBER: 51:  The number of points the IAM Cycling team earned during the 17th stage, thanks as well to the 15th place of Heinrich Haussler. IAM Cycling, which is still the only Swiss professional team in the World Tour will get up in the morning tomorrow for the ceremonial podium to receive its bonus points for the stage win.

THE MENU OF THE DAY: 240 kilometers between Muggio and Pinerolo Thursday for the 18th stage where Stefan Denifl will have a chance to defend his second place in the best climber’s category.  The Austrian has only 3 points ahead of Darwin Atapuma and 11 in front of Giovanni Visconti.